Finally, we get to the RPG I’ve been wanting to play for Valentine’s Day. While I have hinted towards the game in my previous Valentine’s Day special, I figured I’d draw the suspense before my inevitable unveiling. When I first discovered this game, I fell in love with the premise and how the setting could set up to be a nice Evangelion-esqe story.

The plot? Right now, aliens have invaded Earth with a force that has put a huge chunk of the human population to eternal sleep. The survivors were unable to keep the economy, society, or any remote stability afloat, and so everything on Earth fell into chaos. To make matters worse, the aliens usually sent out robotic drones to pick off survivors.

However, a small band of survivors managed to grab one of these drones and reverse engineer them to create their own mechs. To put simply: to fight the monsters, they have created a monster, ANIMa. And so, they wage war against the aliens. Now is the time to fight back. This game’s story alone makes me want to play it. Ladies and gentlemen, I present to you: Bliss Stage.

This game is in a whole different dimension with its lore and concept of the game. The basic idea is “what if Shinji fought Angels in dreams Inception style?” … Okay, probably a little more complex than that. The idea is that a Pilot enters a deep sleep. In their dreams, they pilot an ANIMa comprised of armor and weapons representing the relationships of friends, lovers, and even enemies.

Helping the Pilot out is their Anchor. They’re people who are outside the dream who help the Pilot out by checking their status, guiding them through the dream, and can even eject them by giving them a kick to wake them up. Think of them as the Operators in the Matrix rather than the staff at NERV.

But enough about getting into the story, let’s get started. This is one of many RPGs that has a pretty nice guide on how to begin playing the game, starting with a pretty nice piece of advice regarding how you should make the sessions sociable for people, like doing theatre exercises or even cooking dinner. I have played a lot of sessions where we would usually have something special occurring, even if it’s simply “let’s order a pizza” or “I brought snacks.”

The game asks for us to pick a GM. In this case, we’ll crack out CRGE Kai, which is CRGE with bits of Mythic attached to it. Next, we make up a Resistance Group of about ten people or so. I’d probably go with just saying there’s 10 of them, then make them when it comes time to introduce them. For location of where the resistance is, I’m gonna say a farmhouse sounds interesting. While they have access to food (I’ll say at least some of the people there are farmers), shelter and clothing, they’re lacking in sanitation, water they can sort of get, electricity they have no luck on (they have to steal power from the city nearby), and the only medicine they can provide without raiding is homemade stuff.

So yeah, a pretty decent challenge. I’ll also say that, recently, they were caught in a theft gone horribly wrong and are now wanted by kids passing themselves off as the law, when in reality, there just simply the kids from Lord of the Flies wearing oversized cop uniforms. By this point, I think I’m composing the Mythic Sheet riiiiiight abouuuut now.

The Aliens… Yeah, I’m gonna take a nod from the book and make them the Angels found in the Bible. The Dream World will be generated by Zero Tangent, where a single object might become the entire theme of the world for the battle. If you guys seen Madoka Magica, think of it like the Labyrinths. Hmm… Maybe some of the drones could take the form of something weird seen in the dream.

But that’s enough going into detail for now. Let’s begin creating a character! I’ll play a Pilot, mainly because why not, so I’ll answer a few questions with BOLD.

Okay, so we’re going with a mix of Shinji and Kaji. I like it. Next, we pick out the Pilot’s hope. I think it’s pretty obvious that his hope is to establish a better civilization in place of the Lawl, the group of savage kids acting as cops. Now that we got our hopes out of the way, it’s time to pick a template for this Pilot and apply the following stats.

I’m going with Rising Hero, since that fits him. This will also allow us to flesh out the characters a bit. I need about six people. The top relationship, one with an Intimacy of 4 and a Trust of 2, will be automatically assigned to his crippled friend. I’ll roll up whether the person’s a boy or a girl.

So it’s a girl. Her name will be Sayaka. The next five will be randomly generated.

Everyone else gets an Intimacy 1, Trust 3.

With Jack being Shun’s designated Anchor, I’ll have her template be that she is Driven. By this point, I notice that the creator suggests I name an Anchor after an old crush I had back in middle/high school. I’ll stick with Jack.

And with that, we compile what we have for stats and put them up in a Character Sheet done by a fan of Bliss Stage… 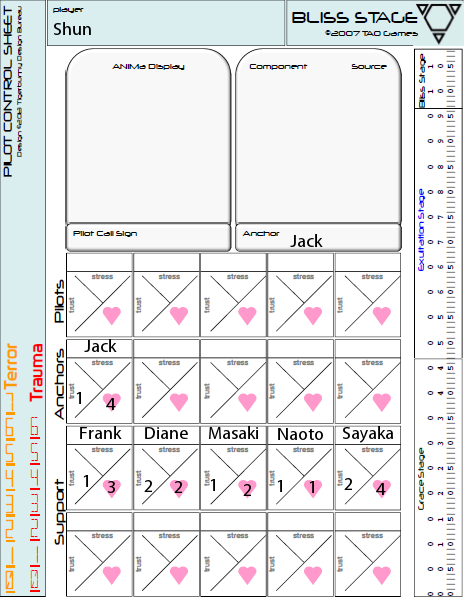 I do have to say, it’s pretty well-laid out.

However, there is an elephant in the room that I must address. You may have noticed that one of the stats is called “Intimacy”. Bliss Stage, as I have said before, is a game about piloting robots with the power of love in a post-apocalyptic setting. However, I didn’t quite say how much love can power it or just what kind of post-apocalyptic setting it is.

See, when the aliens attacked, that huge chunk of humanity that fell to sleep (sans the Authority Figure, who will have some reason for staying awake) had a pretty common pattern: all of them were past the age of 18. The highest ranking of Intimacy, 5, is achieved through…

From there, you may be able to piece two and two together. This is pretty much the deal breaker for Bliss Stage. However, I have an idea to go around this. My original idea was to increase the age limit a la Logan’s Run, but then I noticed the Intimacy charts. Save for 5, all of them have non-sexual means of achieving that Intimacy level.

As such, I’ve decided to make a bit of a compromise and change the rules a bit. Intimacy 5 can be achieved through marriage. I doubt I’m ever gonna run into the thing though, but this is just in case.

With that out of the way, see you all on Valentine’s Day.

5 thoughts on “Stat It: Bliss Stage”

This site uses Akismet to reduce spam. Learn how your comment data is processed.